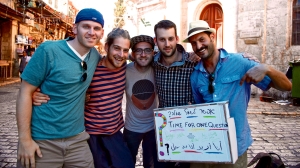 5 minute Documentary film asking Israelis and Palestinians ONE WISH that would come true by the end of the day. Video was filmed in one day in Jerusalem. Our films highlight our shared humanity and are intended to be used as educational tools to open avenues for constructive conversations among individuals and peoples in conflict. Filmed as a response to an Iranian Filmmaker’s video, One Wish Jerusalem features the diversity of life, views and hopes of the people living in Jerusalem.